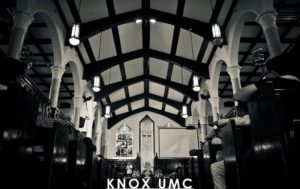 Church workers and lay members sought the street dwellers in the places they frequented and invited them to have free snacks every Tuesday afternoon. A table was set outside the church gate and warm porridge was served. A cupcake was added to their snack every third Tuesday. The offer for free snacks did not come with any condition for the street dwellers to participate in Knox UMC’s church activities.

Eventually, full meals consisting of rice with viand and juice replaced the snacks after six months when they became active participants in a new worship service made for them.

“Have a refreshing bath!”

Personal hygiene was critical to the street dwellers. They used the restrooms in gasoline stations or paid P5.00 – P20.00 to use the showers or toilets in public markets. The streets would always be available if the first two options were unavailable. Knox UMC offered an area inside the church compound where they can bathe. Toiletries and towels were provided to them.

“We have some clothing our members would like you to have.”

The church realized that the street dwellers needed a change of clothes after their bath. The offer of clothing made them aware that more church members were concerned about them.

Three months after the Loading Ministry’s inception, the pastors invited the street dwellers interested to be prayed over inside the church. Those who accepted the invitation were brought to the altar where they were prayed over and anointed with oil by the pastors.

Knox UMC developed a worship service that was sensitive to the diverse background of the street dwellers. The Word and its preaching were significant to their spiritual formation, but the overall service had to give off an atmosphere of fun. The Word was shared in a storytelling mode. Games, testimonies, group dynamics, health tips, Bible drills, teaching hymns and praise songs through the use of videoke were incorporated. A choir was formed from among them and the choir members were offered free lunch for the additional time they put in for practice.

“In sickness and in health…”

Medicine was offered to them whenever they were sick. They were given free medical consultations by church members who were physicians.

“We are involved in your life and death.”

Memorial services were held for Loading Ministry participants who had died. Financial help for their burial was also extended to their families.

There was constant affirmation to them that God loves them and Knox UMC is an instrument of God’s love.